Posted at 11:15h in Blog by Fifty Bees
Share

A true institution of running in France, the SaintéLyon is a phenomenon in itself: a night outing in the cold, mixing trails and asphalt that combines several formats ranging from 11 to 156 km! It is on the historical course of 78km, starting from Saint Etienne and arriving in Lyon that our bee Sylvain Poncet signed for, last November 28th, for the 67th edition of the legendary race…

But by the way… A bee doesn’t live at night ? The « halicte » (Scallop Bee), a solitary bee, is well  known for its nocturnal activity. It lives in the ground – which is good news, since the SaintéLyon is famous for its mud baths! And doesn’t a bee die when it gets cold? It is common for bees to die in winter, but it is in fact from hunger and not from cold. The more the temperatures fall, the more they consume their honey and if they lack reserves, they die. Fortunately on the SaintéLyon the refreshments are well stocked to avoid any hypoglycemia…

The 2021 edition did not deny the reputation of the SaintéLyon. Snow in big flakes at the start, the paths and roads were white. And if you left like our bee at 0:15 am with the 4th wave of departures, you were very likely not to have powder but a thin film of ice on a good part of the course instead.

With the triple layer ready, the headlamp in place and the backpack with the necessary food and water, it was time for the steep climbs and the slippery descents. We had to be careful on the icy parts and at the same time take some risks to respect the time objective. Inevitably a few falls here and there, but not too many injuries… except for the ego! 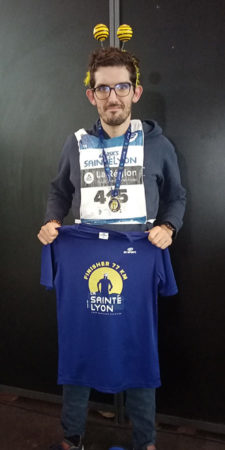 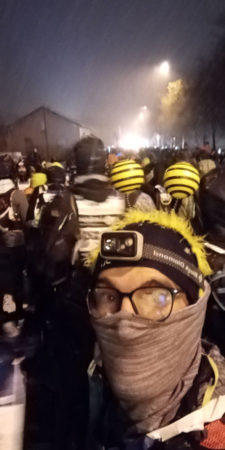 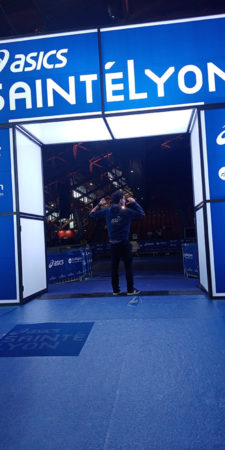 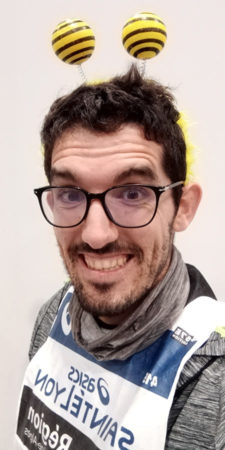 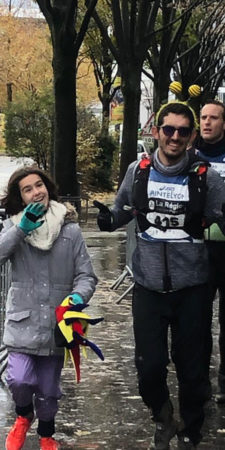 If the Halicte is a solitary bee, for the SaintéLyon, it is better to run in team because the time can seem long and having a support on all or part of the event is a real comfort. Our bee started with his brother for their first race together. A little gesture of encouragement, sharing a cereal bar in this difficult moment or simply chatting to fill in some time was precious.

It took 6 hours and 45 km until Saint André Signal to get rid of the snow. If afterwards the weather conditions were more favorable, it was the beginning of muscular tensions and articular pains. Even in unsuspected areas for the runners such as shoulders or forearms!

After Saint André Signal, it is Chaussan, then Soucieu en Jarrest and finally Chaponost, last refreshment point. We take the last bars, a small coffee or a soup but we do not stop too much because it is increasingly hard to start again muscularly. The crowd becomes denser on this part of the race. They encourage us. We thank them and greet them with a smile – even if we actually bite our tongues to keep up with the rhythm of the race.

Ascent of the aqueducts of Sainte Foy Les Lyon, go, a little effort still! Here is finally Lyon and therefore the arrival which is looming! La Mulatière bridge, only two kilometers left, we don’t let go! Raymond Barre bridge, one kilometer, we are almost there! We see the Halle Tony Garnier! We get in, we go under the arch and it’s over! 78 km within 10 hours 45! What an ordeal!

A huge hug to the family who supported the runners during the event. Tears of joy for having surpassed so much and rewarding 3 months of intense preparation.  Even if it was hard, the SaintéLyon fulfilled its motto “A race to do once in a lifetime”.

Big congrats to Sylvain Poncet for this amazing performance. The Bees are very proud to have such accomplished athletes on their team 😉